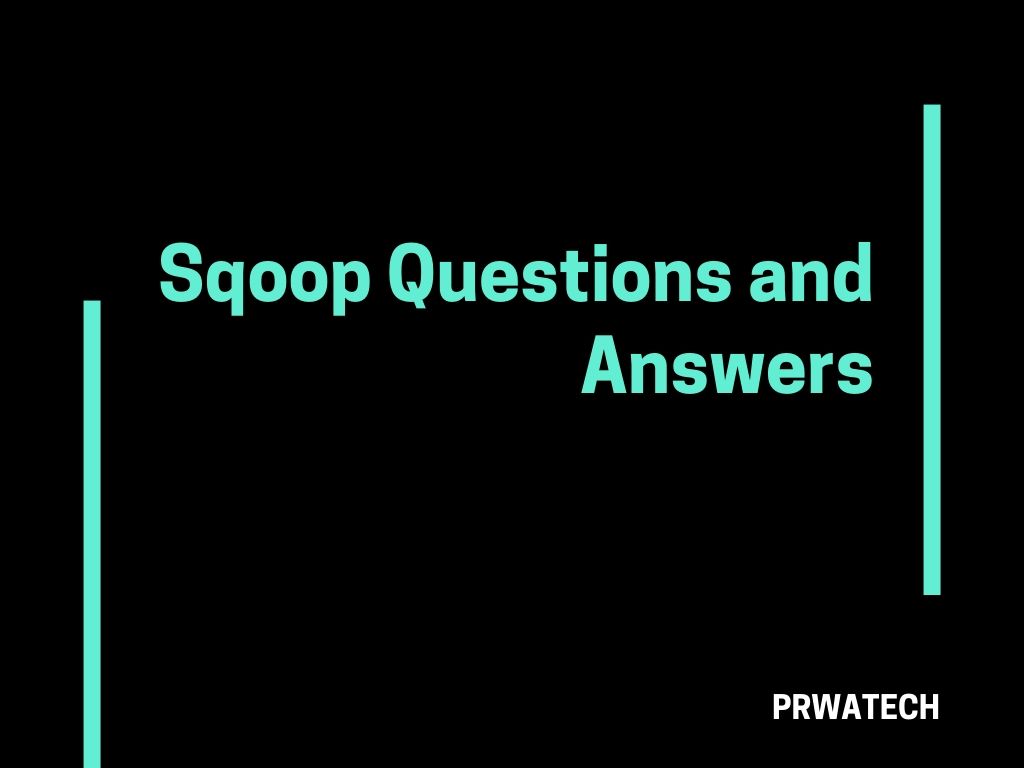 If you are the one who wanted to become the certified Pro- Hadoop Developer? Or the one who wanted to explore the Technology like a Pro under the Certified Experts with World-class classroom Training Environment, then Asks your Big Data Training institute Experts who offer Advanced Big Data Hadoop Certification. Follow the below Mentioned Top Rated Sqoop Interview Questions and answers and Brush up your skill like a pro.

What is Apache sqoop?

Ans: – It is a tool in the Hadoop echo system which is basically used to transfer the data between RDBMS and Hadoop. It can import data from RDBMS to Hadoop and export data from Hadoop to RDBMS.

What are the relational databases supported in Sqoop?

Ans: Below is the lists of RDBMSs that are supported by Sqoop Currently.

What are the destination types allowed in Sqoop Import command?

Currently, Sqoop Supports data imported into the below services.

What are the majorly used commands in Sqoop?

How many mappers and reducers will be submitted for sqoop copying to HDFS?

4 mappers will run by default and no reducer.

How can we control the parallel copying of RDBMS tables into Hadoop?

We can control/increase/decrease the speed of copying by configuring the number of map tasks to be run for each scoop copying process.
We can do this by providing an argument -m 10 or –num-mappers 10 argument to sqoop import command.
If we specify -m 10 then it will submit 10 map tasks parallel at a time.
Based on our requirement we can increase/decrease this number to control the copy speed.

While loading tables from MySQL into HDFS, if we need to copy tables with maximum possible speed, what can you do?

We need to use –direct argument in import command to use direct import fast path and this –direct can be used only with MySQL and PostGreSQL as of now.

what does split by doing in the hive?

It is used to specify the column of the table used to generate splits for imports.
This means that it specifies which column will be used to create the split while importing the data into your cluster.
It can be used to enhance the import performance by achieving greater parallelism.
Sqoop creates splits based on values in a particular column of the table which is specified by –split-by by the user through the import command.
If it is not available, the primary key of the input table is used to create the splits.
##.Reason to use: Sometimes the primary key doesn’t have an even distribution of values between the min and max values(which is used to create the splits if –split-by is not available).
In such a situation you can specify some other column which has proper.

How to provide passwords to user accounts of RDBMS in runtime?

The -P argument (prompts for user password) will read a password from a console prompt,
and is the preferred method of entering credentials.

When the RDBMS table is only getting new rows and the existing rows are not changed, then how can we pull only the new rows into HDFS via sqoop?

We can use –incremental append argument to pull only the new rows from the RDBMS table into the HDFS directory.

When existing rows are also being updated in addition to new rows then how can we bring only the updated records into HDFS?

In this case, we need to use –incremental lastmodified argument with two additional mandatory arguments –check-column

What is the default file format that is used to store HDFS files or Hive tables when and RDBMS file is imported via Sqoop?

The default file type is text file format. It is the same as specifying –as-textfile clause to sqoop import command.

What is Sqoop Metastore?

It is a tool using which Sqoop hosts a shared metadata repository.
Multiple users and/or remote users can define and execute saved jobs (created with sqoop job) defined in this metastore

It allows the user to run sample SQL queries against the Database and preview the results on the console.

How can you import only a subset of rows form a table?

By using the WHERE clause in the sqoop import statement we can import only a subset of rows.

How can you export only a subset of columns to a relational table using sqoop?

By using the –column parameter in which we mention the required column names as a comma-separated list of values.

How to import a table definition from MYSQL into Hive using sqoop?

How can you see the list of stored jobs in sqoop metastore?

How to export data from HDFS to RDBMS?

How to import all tables from a database from RDBMS to HDFS?

How to use –where condition in Sqoop?

where clause used for filtering the data which is going to be imported to HDFS.
sqoop import –connect jdbc://ipaddress/databasename –username username –password password –table tablename -target-dir /dirname -m 1 –where “id >= 2”

What is an incremental append in sqoop?

To incrementally append the data to the existing HDFS we use incremental clause in sqoop.

How to incrementally import mutable data with timestamp value?

We use incremental lastmodified for such type of mutable imports.

How to create a sqoop Job?

This command is used to create a job with a particular function and can be used again and again without writing the whole command.

How to execute a sqoop job?

How to import data from RDBMS to the hive table?

how to split records based on any other column instead of the primary key column in a table?

How to load RDBMS data to HDFS in avro file format?

The incoming value from HDFS for a particular column is NULL. How will you load that row into RDBMS in which the columns are defined as NOT NULL?

Using the –input-null-string parameter, a default value can be specified so that the row gets inserted with
the default value for the column that it has a NULL value in HDFS.

The first and best function of Sqoop?

Ans: Sqoop can import individual tables or entire databases into HDFS. The data is stored in the native directories and files in the HDFS file system.

Ans: Sqoop uses MapReduce to import and export the data, which provides parallel operation as well as fault tolerance.

What is the data loading or import in Sqoop?


Sqoop imports data into three kinds of data storage what are those?

What is Apache Sqoop?

Sqoop was originally developed by Cloudera. The name ‘Sqoop’ is a short form for ‘SQL-to-Hadoop’.

Sqoop can import full or partial tables from a SQL database into HDFS in a variety of formats. Sqoop can also export data from HDFS to a SQL database.

What is the basic command-line syntax for using Apache Sqoop?

Ans: Apache Sqoop is a command-line utility that has various commands to import data, export data, list data, etc. These commands are called tools in Sqoop. Following is the basic command-line syntax for using Apache Scoop.

How do you import data from a single table ‘customers’ into HDFS directory ‘customerdata’?

Ans: You can import the data from a single table using the tool or command ‘import –table’. You can use the option ‘–warehouse-dir’ to import the data into ‘customerdata’ HDFS directory.

Using Sqoop command how can we control the number of mappers?.


How Sqoop can be used in a Java program?

Ans: The Sqoop jar in classpath should be included in the java code. After this, the method Sqoop.runTool () method must be invoked. The necessary parameters should be created to Sqoop programmatically just like for the command line.

What is a sqoop metastore?

Ans: It is a tool using which Sqoop hosts a shared metadata repository. Multiple users and/or remote users can define and execute saved jobs (created with sqoop job) defined in this metastore.

Clients must be configured to connect to the metastore in sqoop-site.xml or with the –meta-connect argument.

What is sqoop-merge and explain its uses?

Ans: A sqoop merge is a tool that combines two different datasets that maintain the only version by overwriting the entries in an older version of a dataset with new files to make it the latest version dataset. There happens a process of flattening while merging the two different datasets which preserves the data without any loss and with efficiency and safety. In order to perform this operation merge key command will be used like “–merge-key”