The Below mentioned Tutorial will help to Understand the detailed information about Import Data from a MySQL DB to an Amazon RDS MySQL DB Instance, so Just Follow All the Tutorials of India’s Leading Best AWS Training institute and Be a Pro AWS Developer.

♦ You can also import data from an existing MySQL database to an Amazon RDS MySQL DB instance.

♦ You can copy the database with mysqldump and piping it directly into the Amazon RDS MySQL DB instance.

♦ The mysqldump command-line utility is inbuilt in MySql commonly used to make backups and transfer data from one MySQL server to another. It is included with MySQL client software.

The following example copies the database name world sample from the local host to an Amazon RDS MySQL DB instance.

For Linux, OS X, or Unix

The following command needs to be run in a command prompt that has been opened by right-clicking Command Prompt on the Windows programs menu and choosing Run as administrator:

By running above command you can see the database successfully imported: 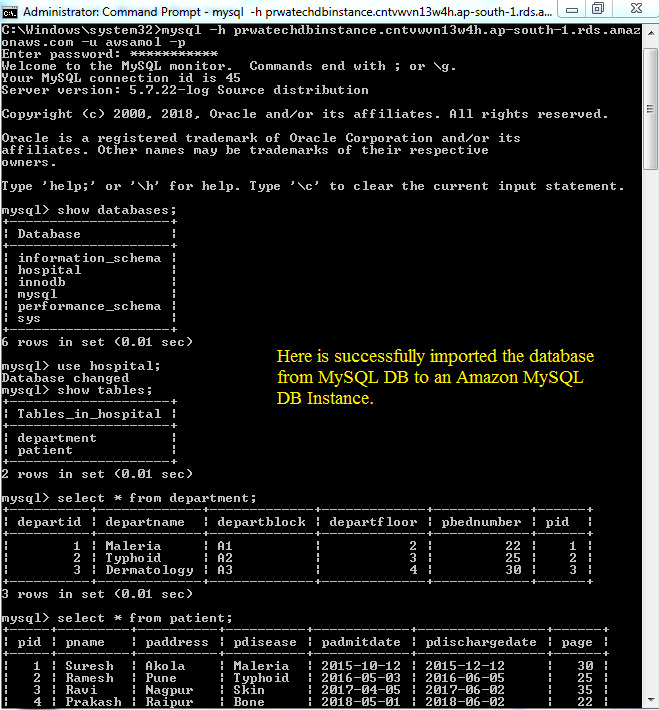 ♦ Use localuser = your MySQL username

♦ database_name = database name which you have to import to AWS RDS

♦ Make sure not to leave a space between the -poption and the entered password.

♦ Add a rule for the inbound TCP port in the security group used by your database instance to communicate with your client workstation.

Exporting database from Amazon RDS MySQL DB Instance to your MySQL DB is as easy as import by using below commands:

You can use replication to export the database from a MySQL 5.6 or later DB instance to a MySQL instance running external to Amazon RDS.

Run the MySQL SHOW SLAVE STATUS statement on the Amazon RDS read replica, and note the values for the following:

mysqldump utility is used to create a snapshot, which copies the data from Amazon RDS to your local client computer. Then run another utility to load the data into the MySQL instance running external to RDS.

The following example shows you how to run mysqldump on a client, and then pipe the dump into the MySQL client utility, which loads the data into the external MySQL instance from Amazon RDS.

For Linux, OS X, or UNIX 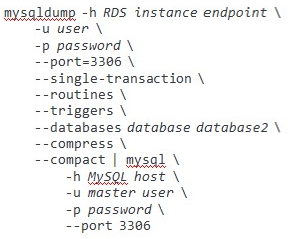 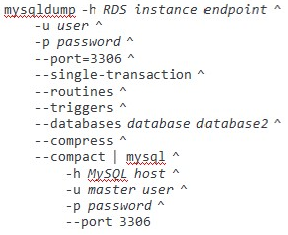 The following example shows how to run mysqldump on a client and write the dump to a file:

For Linux, OS X, or UNIX

Amazon RDS supports to import the MySQL databases by using backup files. You can take a backup of your on-premises database, store it on Amazon S3, and then restore the backup file onto a new Amazon RDS running MySQL DB instance.

You can find the supported scenario in the following diagram. 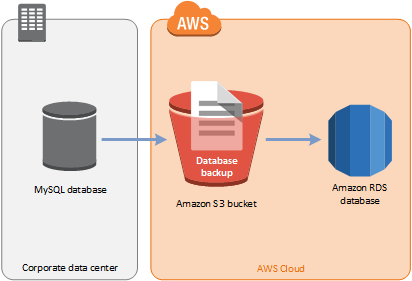 # Last but not least, always asks for help!