The Below mentioned Tutorial will help to Understand the detailed information about Amazon Simple Queue Service, so Just Follow All the Tutorials of India’s Leading Best AWS Training institute and Be a Pro AWS Developer.

♦ SQS eliminates the difficulty and problems associated with managing and operating message-oriented middleware and empowers developers to focus on differentiating work.

♦ Using SQS (Simple Queue Service), you can send, store, and receive messages between software components at any volume, without losing messages or requiring other services to be available.

♦ SQS is designed to provide a highly scalable hosted message queue that resolves issues or problems arising from the common producer-consumer problem or connectivity between producer and consumer.

♦ Multiple producers and consumers can interact with the SQS at the same time.

♦ Loose Coupling-> high availability, scalability, and reliability for your architecture.

♦Integrated with IAM-> you can decide who can access it.

♦ It Can send/receive/delete a maximum of 10 messages in a request in case of batch request and in case of single request message limit is 1.

♦ Message Timer: Let’s you specify an initial invisibility period for a message.

♦ Visibility Timeout: Makes messages unavailable for other components when one component is processing it.

♦ Dead Letter Queue: A queue to send messages which were not successfully processed.

♦ Amazon SQS Access Control: Allows you to grant particular interactions to other accounts by assigning policies to SQS queues.

♦ SQS Long Polling: Long polling eliminates false empty responses by querying all (rather than a limited number) of the servers.

Amazon SQS used because it has innumerable benefits and some of them are stated below:

♦ Durability: To ensure the safety of your messages, Amazon SQS stores them on multiple servers, because Amazon’s first priority is your security.

♦ Scalability: Amazon SQS can process each buffered request independently, scaling transparently to handle any load increases or spikes without any managing instructions.

♦ Reliability: Amazon SQS locks your messages during processing so that multiple producers can send and multiple consumers can receive messages at the same time simultaneously.

♦ Customization: You can store the contents of messages larger than 256 KB using Amazon Simple Storage Service (Amazon S3) or Amazon DynamoDB, with Amazon SQS holding a pointer to the Amazon S3 object, or you can divide a large message into smaller messages.

This section overviews the parts of a distributed messaging system and explains the lifecycle of an Amazon SQS message.

There are three main parts in a distributed messaging system: the components of your distributed system, your queue (distributed on Amazon SQS servers), and the messages in the queue.

In the following example, your system has several components that send messages to the queue and receive messages from the queue. The queue (which holds messages A through E) redundantly stores the messages across multiple Amazon SQS servers as shown in the example given below:

The following example describes the lifecycle of an Amazon SQS message in a queue, from creation to deletion of the message. 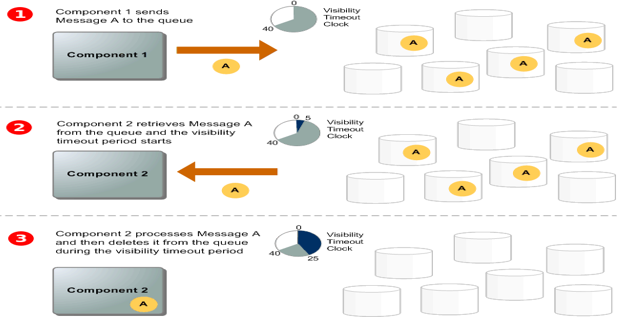 ♦ Best-Effort Ordering: Occasionally, messages might be delivered in an order different from which they were sent.

♦ First-In-First-out Delivery: The order in which messages are sent and received is strictly preserved.

♦ Exactly-Once Processing: A message is delivered once and remains available until consumer processes and deletes it. Duplicates are not introduced into the queue.

Difference between deleting and purging messages in SQS

♦ PurgeQueue: Delete all the messages; keep the queue.

Some of the components of SQS metadata could be

♦Using CLI (Command Line Interface):-
You can use the AWS CLI for ad hoc operations, such as creating a Queue. You can also use it to embed Amazon SQS operations within utility scripts.

Before you can use the AWS CLI with Amazon SQS, you must get an access key ID and secret access key.

Before you can use the AWS SDKs with Amazon SQS, you must get an AWS access key ID and secret access key.

# Last but not least, always asks for help!