It is OS, its is multitasking , multiuser which connects one path to anther path. 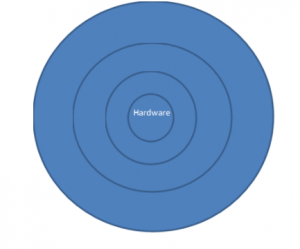 There are two layers between user and hardware

outer layer is User and inner most layer is Hardware

It is interface between kernel and user. It is also Known as command line interpreter. Gets  a request from user and pass to the request to kernel.

It is interface between Hardware and shell.  It will provide service to the Hardware to access the file to open, read , write, create and updating record. It will enhance the security by validating user request. It is kind of manger which will handle execution, changing of ownership and killing of the processes.

[Hardware = it is the innermost layer]