Get Started with Tableau

Box and Whisker Plot is also called Box Plot.It helps in displaying the data distribution by their quartiles. The lines which are extending parallelly from the boxes are called the ‘whiskers’, which help in indicating the variability outside the lower and upper quartiles. Outliers are usually plotted as individual dots which are in-line with the whiskers. Box Plots can be drawn horizontally or vertically. 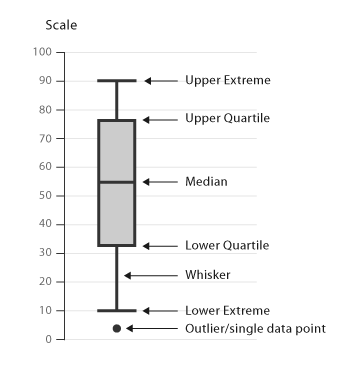 Box and Whisker plots are very useful in comparing distributions between various datasets or groups. The insights which one can be drawn from Box plots are:

The key values such as: the average, median percentiles etc.

Outliers and what their values.

How tightly is the data grouped.

Skewness of data and in which direction.

The box denotes the values between the first and third quartiles (also called interquartile range=Q3 – Q1). The whiskers denote the distances between the lowest value to the first quartile and then the fourth quartile to the highest value. Each quartile has a precise numeric value, determined from the data.

Consider the numeric values given below as a data set. We would learn how to find minimum, Q1, the median, Q3, and the maximum from the following date set.

Q1 : 5; median of the lower half of data set or first quartile

Median : 12;the middle most number

Q3 : 18; median of the upper half of data set or third quartile

Let’s explore the Box and Whisker plots in the following steps. We have used Sample EU Superstore data which is provided by default by Tableau.

Firstly drag Sub Category and Region variables from ‘Dimensions’ to Columns. Then drag Sales from ‘Measures’ to Rows. Then click on Box and Whisker plots from ‘Show Me’ section to create the chart. The arrows in the diagram below demonstrate the same. 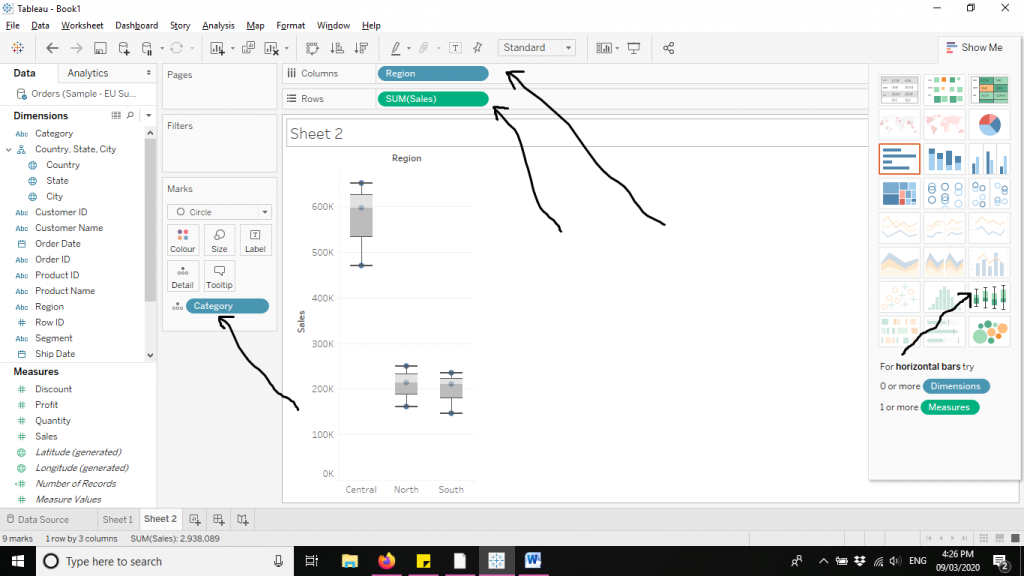