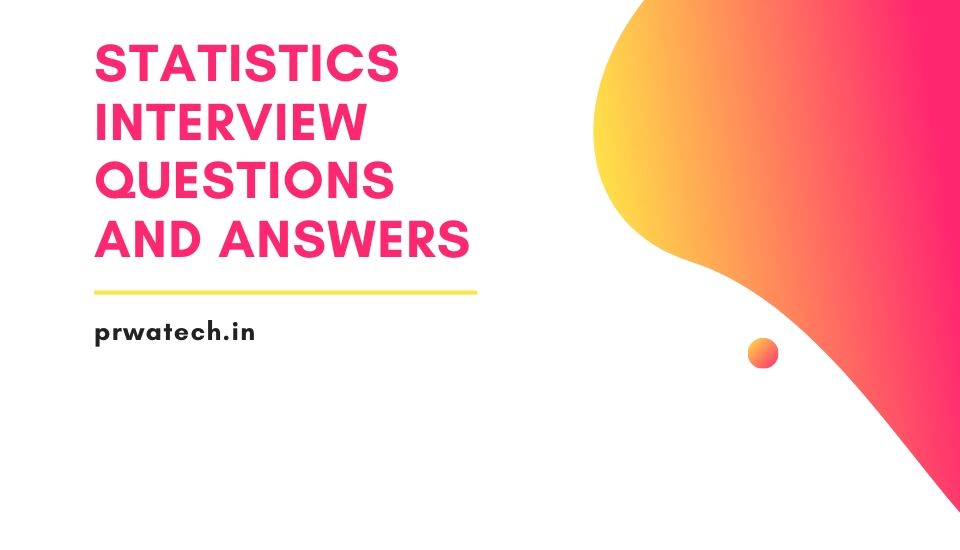 Statistics Questions For Interviews and Answers

Are you the one who is a hunger to become Pro certified Data science Developer then ask your Industry Certified Experienced Data Science Trainer for more detailed information? Don’t just dream to become Pro-Developer Achieve it learning the Data Science Course under world-class Trainer like a pro. Follow the below-mentioned interview questions on statistics with answers to crack any type of interview that you face.

What is inferential statistics?

What is the mean value of statistics?

Ans)Mean is the average value of the data set.

What is Mode value in statistics?

Ans)The Most repeated value in the data set

What is the median value in statistics?

What is the Variance in statistics?

Ans)Variance measures how far each number in the set is from the mean.

What is Standard Deviation in statistics?

Ans)It is a square root of the variance

How many types of variables are there in statistics?

How many types of distributions are there?

What is the normal distribution?

What is the standard normal distribution?

What is Binominal Distribution?

Ans)A distribution where only two outcomes are possible, such as success or failure and where the probability of success and failure is the same for all the trials then it is called a Binomial Distribution

What is the Bernoulli distribution?

Ans)A Bernoulli distribution has only two possible outcomes, namely 1 (success) and 0 (failure), and a single trial.

What is the Poisson distribution?

What is the central limit theorem?

What is P-Value, How it’s useful?

1. The p-value is the level of marginal significance within a statistical hypothesis test representing the probability of the occurrence of a given event.
2. If the p-value is less than 0.05 (p<=0.05), It indicates strong evidence against the null hypothesis, you can reject the Null Hypothesis
3. If the P-value is higher than 0.05 (p>0.05), It indicates weak evidence against the null hypothesis, you can fail to reject the null Hypothesis

What is Z value or Z score (Standard Score), How it’s useful?

Ans)Z score indicates how many standard deviations on the element is from the mean. It is also called the standard score.

What is T-Score, What is the use of it?

What is IQR ( Interquartile Range ) and Usage?

Ans)
1. It is the difference between 75th and 25th percentiles, or between upper and lower quartiles,
2. It is also called Misspread data or Middle 50%.
3. Mainly to find outliers in data, if the observations that fall below Q1 − 1.5 IQR or above Q3 + 1.5 IQR those are considered as outliers.
4.Formula  IQR = Q3-Q1

What is Hypothesis Testing?

Ans)
Hypothesis testing is a statistical method that is used in making statistical decisions using experimental data. Hypothesis Testing is basically an assumption that we make about the population parameter.

How many Types of Hypothesis Testing are there?

What is Univariate, Bivariate, Multi-Variate Analysis ?

Ans) They are as follows:

Explain the difference between Type I error & Type II error

Ans:- Type I and type II errors are part of the process of hypothesis testing.

Ans. Accuracy is a metric by which one can examine how good is the machine learning model. Let us look at the confusion matrix to understand it in a better way:

Ans Z-test determines to what extent a data point is away from the mean of the data set, in standard deviation. For example:

Principal at a certain school claims that the students in his school are above average intelligence. A random sample of thirty students has a mean IQ score of 112. The mean population IQ is 100 with a standard deviation of 15. Is there sufficient evidence to support the principal’s claim?

So we can make use of a z-test to test the claims made by the principal. Steps to perform z-test:

1. Stating the null hypothesis and alternative hypothesis.
2. State the alpha level. If you don’t have an alpha level, use 5% (0.05).
3. Find the rejection region area (given by your alpha level above) from the z-table. An area of .05 is equal to a z-score of 1.645.
4. Find the test statistics using this formula: