The decision tree algorithm falls under the type of supervised learning. It can be applied in cases of both regression and classification problems. A tree representation is used by a Decision tree to solve a problem where every leaf node resembles a class label and attributes represent the internal node of a tree. 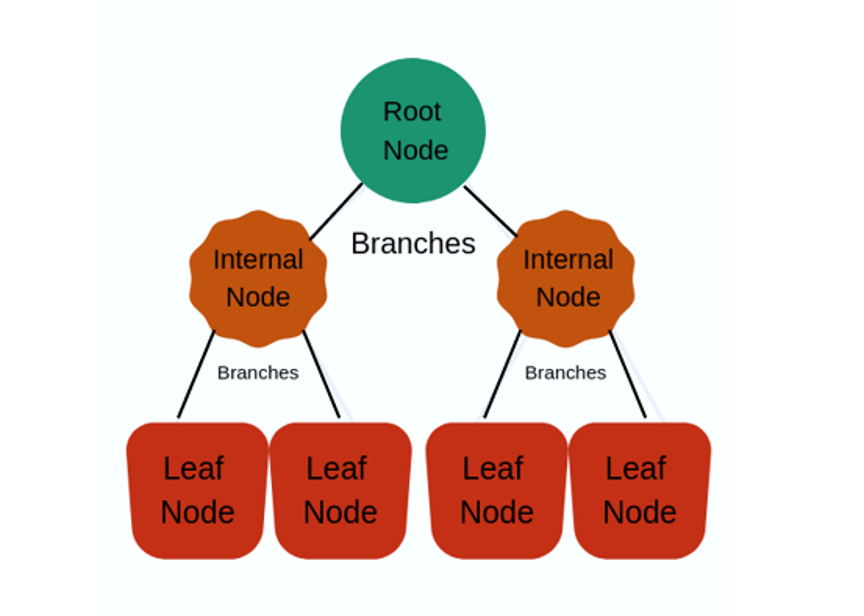 Root Node: It signifies the whole population or sample which is further divided into two or more homogeneous sets.

Splitting: It is a method of dividing a node into two or more sub-nodes.

Decision Node: A sub-node divided into further sub-nodes, then it is called a decision node.

Leaf/ Terminal Node: Nodes that do not divide into sub-nodes are called Leaf or Terminal node. These are end nodes.

Pruning: The process of removing sub-nodes from the decision node is called pruning. It’s exactly opposite to splitting.

Branch / Sub-Tree: A subpart of the entire tree is called branch or sub-tree.

How to create a Decision Tree

While creating a decision tree, on every node of a tree we have to ask a different types of questions. Based on the asked question we will calculate the information gain corresponding to it.

Entropy is a measure of uncertainty of a random variable. It symbolizes the impurity of a random collection of examples. The greater entropy indicates higher information content.

It is the entity that is required to decide which feature is to split or divide it on at every step in building the tree. To keep tree small, at every step we should select the split that outcomes in the purest child nodes. Information is a commonly used measure of purity.

Information value measures the quantity of information, a feature giving about the class. The field has the highest information gain will be taken as the main field to split the whole dataset. This process will continue until all children nodes are pure, or until the information gain is 0.

Usually, decision tree creation works top-down. It selects a variable at each step that best splits the set of items. Different algorithms follow different matrices for measuring best. Suppose X is a set of instances, P is an attribute, Xv is the subset of X with P = v, and Values (P) is the set of all possible values of P, then

Let’s take a weather report into consideration for classifying on basis of different categories. The target here is to decide whether to play cricket or not for a particular day.

Now based on the Decision tree hierarchy, first we have to find here, which feature is the root node. Here we have to calculate ‘Entropy’ for that feature. It can be calculated as:

Where TT= Total number of targets=14 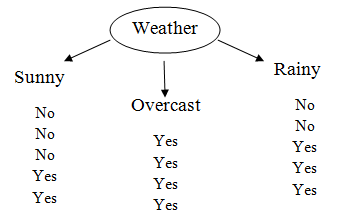 First, we check for the feature ‘Weather’. This image shows the distribution of the target variable depending on subcategories. It is having three subcategories as ‘Sunny’, ‘Overcast’, and ‘Rainy’. We will first calculate individual entropy for each subcategory. It is giving target value yes or No as follows: 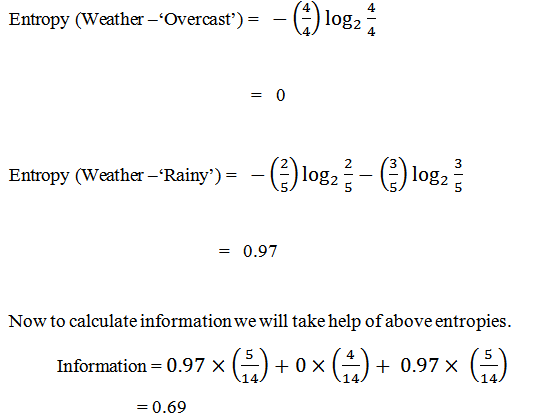 Like this, if we calculate the information gain for all features we get:

It is clearly observed that from the calculation, the information gain of Weather is highest among all. So ‘Weather’ will be the root node. After this, the table is modified by excluding the column of Weather. And the procedure is repeated to get the next internal or leaf nodes. Those whose information gain is very negligible are eliminated. Finally, we get a structure of a decision tree like this: 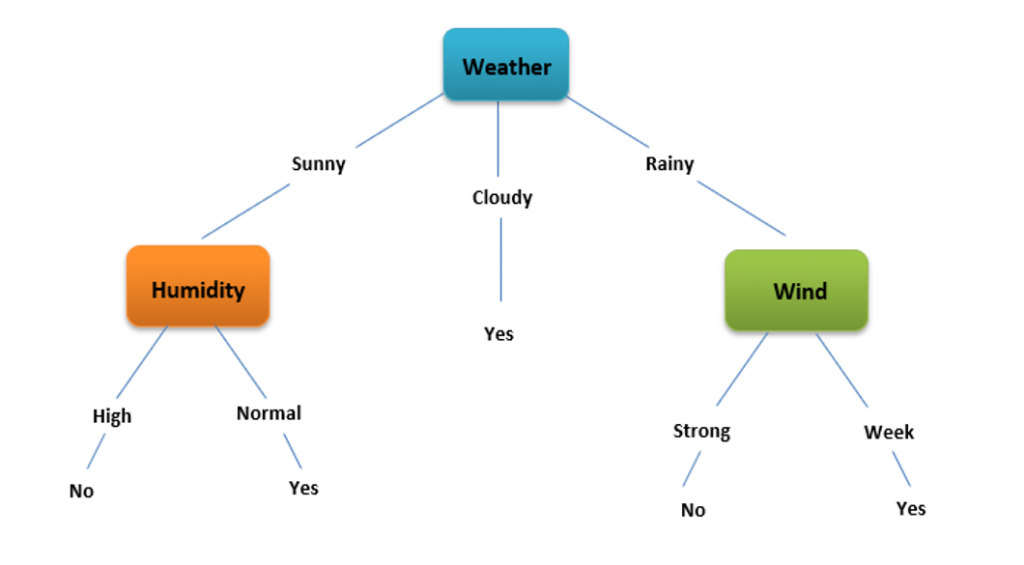 Decision trees are created using an algorithmic approach that determines ways to split a data set based on different conditions. It is one of the most commonly used and practical methods for supervised learning. Decision Trees are a non-parametric supervised learning method utilized for both classification and regression tasks.

Classification Tree: Decision tree models where a target variable can take a discrete set of values are called classification trees.

Regression Tree: These are decision trees with the target variable having continuous values (typically real numbers) are called regression trees. The general term for this is the Classification and Regression Tree (CART).

It is easy to implement and understand.

It can handle both classification and regression data.

It provides resistance to outliers. For that some data pre-processing is necessary.

It disposes to overfitting.

It requires some kind of measurement for performance.

It is necessary to handle parameter tuning correctly.

Overfitting is a key problem for every model in machine learning. The new sample test will be poorly generalized if the model is overfitted. To avoid the issue of overfitting in decision trees we prefer to remove the branches that make use of features having low significance. This method is known as pruning or post-pruning.

Using this method, the complexity of the tree is reduced so that it recovers predictive accuracy by the reduction of overfitting. Pruning should reduce the size of the learning tree without affecting predictive accuracy as measured by a cross-validation set. There are two major Pruning techniques.

Minimum Error: The tree is trimmed back to a point where the cross-validated error is a least or minimum.

Smallest Tree: The tree is trimmed back, slightly next to minimum error. Means this pruning i.e. trimming generates a decision tree with cross-validation error within 1 standard error of the minimum error.

Divide the data set into independent and dependent parts.

Split the data set into two parts for training and testing.

# Here we can change the algorithm as gini or entropy by default it is gini for classification.

Predict Output and calculate the accuracy percentage of the model created.