Thinking of having a career as a Data analyst? Planning to go for a certification in Data science and related subjects but still not getting a conviction whether it is the right thing to do or not? Confused about whether to invest time in gaining knowledge of Data science or not? Such questions can give you sleepless nights, but by taking an advanced data science course from India’s largest E-Learning data science training institute in Bangalore, I am sure that you will get a lot of reasons to build a data science career.

Two or more variables considered to be related, in a statistical factor, if the value of one variable increase or decrease then the value of the other variable (although it may be in the opposite direction). 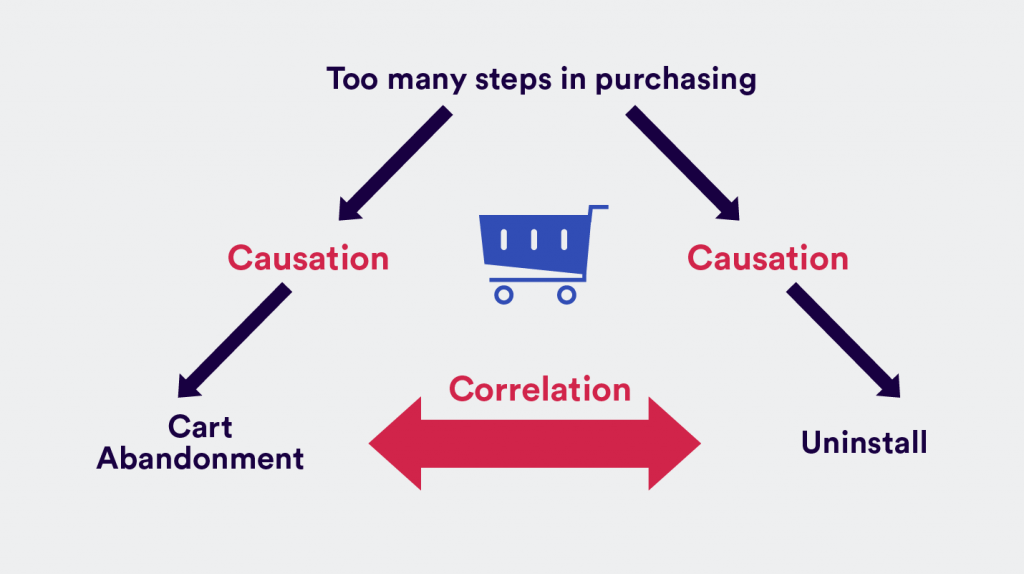 Difference Between Correlation and Causality

Correlation is a statistical unit that describes the size and direction of a relationship between two or more variables. A correlation between variables, however, does not automatically mean that the change in a variable is the cause of the change in the values of another variable.

Causation denotes one event is the result of the phenomenon of the other event; i.e. there is a causal relationship between the 2 events. This is also referred to as cause and effect.

Theoretically, the difference between the two kinds of relationships is easy to determine — an action can cause another (e.g. smoking causes an increase in the risk of developing lung cancer), or it can correlate with another (e.g. smoking can be correlated with alcoholism, but it does not actually cause alcoholism). In practice, however, it remains tough to clearly establish cause and effect, compared with establishing correlation.

Why are correlation and causation important?

The reason for much research or scientific analysis is to determine the extent to which a variable relates to another variable. For example:

Is there a relationship between a person’s education level and his health?
Is ownership of a pet associated with living longer?
Did a company’s marketing campaign will increase their product sales?

These and some other questions are making understand whether a correlation exists between the 2 variables, and if there is a correlation then this may guide further research into determining whether one action causes the other.

How is the correlation measured?

For two variables, a statistical correlation is determined by the use of a Correlation Coefficient, represented by the symbol (r), that is a single number that indicates the degree of relationship between two variables.

The coefficient’s numerical value ranges from (+1.0 to –1.0), which provides a description of the strength and direction of the relationship.

If the correlation coefficient consists of a negative value i.e. below 0, it will display a negative relationship between the variables. This means that the variables move in the opposite direction.

Where the correlation coefficient is 0 this indicates there is no relationship between the variables (one variable can remain constant while the other increases or decreases).

While the correlation coefficient is a useful measure, it has its limitations:

Correlation coefficients are usually associated with measuring a linear relationship.

For example, if you compare hours worked and income earned for a tradesperson who charges an hourly rate for their work, there is a linear (or straight-line) relationship since with each additional hour worked the income will increase by a consistent amount.

If, however, the tradesperson charges based on an initial call-out fee and an hourly fee which progressively decreases the longer the job goes for, the relationship between hours worked and income would be non-linear, where the correlation coefficient may be closer to 0.

Care is needed when interpreting the value of ‘r’. It is possible to find correlations between many variables; however, the relationships can be due to other factors and have nothing to do with the two variables being considered.

The correlation coefficient must not be used to say anything about cause and effect relationships. By examining the value of ‘r’, we can conclude that two variables are related, but that ‘r’ value does not indicate if one variable was the cause of the change in the other.

How can causation be established?

Causality is the area of statistics that is generally misunderstood and misused by people in their mistaken belief that because the data show a correlation than there is definitely an underlying causal relationship.

The use of a controlled study is the most effective pattern of creating causality between two variables. In a controlled study, the sample or population is split into two parts, with both groups being comparable in almost every scenario. The two groups then receive different treatment processes, and the outcomes of each group are examined.

Due to ethical reasons, there are limits to the use of controlled studies; it would not be appropriate to use two comparable groups and have one of them undergo a harmful activity while the other does not. To overcome this situation, observational studies are often used to investigate correlation and causation for the population of interest. The studies can look at the groups’ behaviors and outcomes and observe any changes over time.

The objective of these studies is to display statistical information to add to some other sources of information that would be required for a process of establishing whether or not causality exists between the two variables.

Hope you enjoyed reading this blog. Get to know more about the impact of Data Science on various domains by being a part of the Prwatech based program of Data Science training in Bangalore.