Random Variable Tutorial, Welcome to the world of Statistics and Probability in Data science. In the previous section, we have learned about standard deviation and how it calculates. Now, we will talk about a random variable in data science.

In Data Science, there are many chances that data may affect as data enters from the random sample; standard data error in mean, data is affected by measurement error or data in an outcome which is random. Being an expert Data analyst, it is necessary to have the capability to know where the random variables are generating. If you want to become an expert in Data Science, then get trained from Prwatech, the world’s largest E-learning platform.

What is a Random Variable? 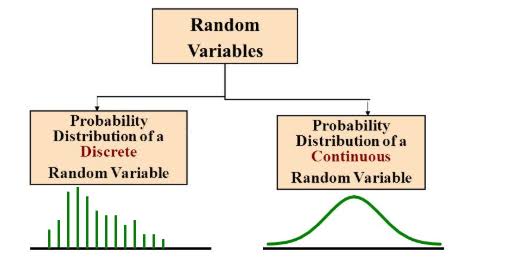 Random variables are often used in econometric or regression analysis to determine statistical relationships among one another. It is different from an algebraic variable. The variable in the algebraic equation is an unknown value that could be calculated.

The equation 12 + x = 13 denotes that we can calculate the specific value for x which is 1. Whereas a random variable has a set of values, and any of those values can be the resulting outcome as seen in the example of the dice above.

►Tossing a Coin and Throwing a Dice.

There are mainly two types of Random Variables.

As the name Suggest, Discrete random variables consist of distinct or discrete unique values. It takes a countable number of distinct values.Now, Consider in an experiment where a coin is tossed five times.

If X represents a number of times that coin comes up heads, then X is a discrete random variable that can only have the values 0, 1, 2, 3,4,5. No other value is possible for X.

Here the number of outcomes that can occur is either a Head or a Tail. Hence we can denote Head, Tail as Random variables as they are distinct in nature.

An example of a continuous random variable can be an experiment that involves measuring the amount of rainfall in a city over a year or the average height of a random group of 25 people.

Here Height can be any value between 4 feet’s to 7 feet’s respectively.

Random variables allow us to ask questions in a mathematical way. If we flip 5 coins and want to answers questions like What is the probability of getting exactly 3 heads, less than 4 heads and getting more than 1 head?

Interested in learning more. Do you want to get in-depth knowledge in Data science or Do you want to become an expert in Data Science – Get enroll now with Data Science Training institute in Bangalore and get the training under 15+ years experienced trainers.

We hope you liked our article on the Random Variable tutorial with examples. Share your feedback with your comments.