If you are the one who is keen to learn the technology then learn the advanced course from the best Data Science training institute who can help guide you about the course from the 0 Level to Advanced level. So don’t just dream to become the certified Pro Developer Achieve it by choosing the best Data Science Training institute in Bangalore which consists of World-class Trainers. 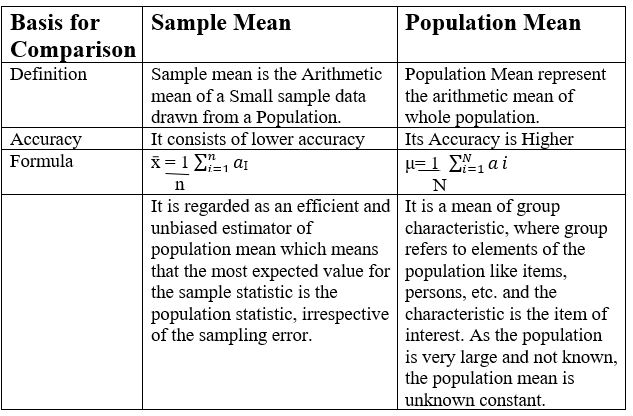 What is Sample Mean and Population Mean?

Sample Mean: Sample mean is required in order to predict the outcome from a sample group of items and the whole population by calculating their Arithmetic Mean.

Population Mean: Population Mean is required in order to predict the outcome from the entire data set. It is calculated the Arithmetic Mean of the Whole Population.

Here the accuracy comparatively very high then that of the sample mean.

Example: Suppose we need to find the voting pattern of National elections in order to predict which party will win.

Here we cannot interview the whole Nations population but we can get some sample data from the population and find its mean.

Hence, we can predict the winner having the highest possibility of winning.

Example: Suppose we need to find the average percentage of marks scored by students in a class.

Here we take marks of the whole population of class into consideration to find the class percentage.

How to find Sample Mean and Population mean?

Example: how many times a day they eat meals if all 107 candidates in a Gym were surveyed to see.

What is the population mean for the number of meals eaten per day?

Interested in learning more? Or do you want to become an expert in Data Science? get your Data science advanced course from Prwatech, India’s Leading Data science training institute in Bangalore.

Hope you liked our article on the sample mean vs population mean. Share your feedback with your comments.